Today’s modern sprinkler systems include sprinkler heads of two types: spray heads and rotary heads. The types of heads utilized on a specific project will be determined by the dimensions of the area being covered, the water pressure available for operation, and a variety of other factors. 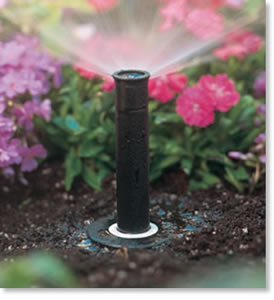 These are usually the most commonly envisioned when thinking of a sprinkler system. These heads are dispersed around the lawn and in planting beds.

Their spacing between sprinklers can vary depending upon the specific nozzle installed in the head, but they are rarely are spaced further than 15 feet apart. (see discussion of nozzles below) Spray sprinklers installed in turf areas are designed to pop-up during watering and retract to below the turf line to allow mowing and normal use of the lawn after watering.

Spray head bodies are commonly available in various sizes, the difference being the height that the spray apparatus or nozzle is lifted above the body of the head. The pop-up heights vary between manufacturers with 2", 3", 4", 6", and 12" pop up sprays being the most commonly available. The high-pop-up models including the 6 inch and 12 inch are used for flower and shrubbery bed areas where risers might be unsightly or subject to damage from passerby.

The most basic version of a spray head is a fixed (non-pop-up) head mounted on a riser. Risers are sometimes PVC, sometimes copper, with the spray nozzle on top. Risers are used to keep the nozzle above the level of the projected growth of shrubs or groundcovers to ensure even distribution of water. These fixed heads typically have nozzles that are interchangeable with the pop-up units used in lawn areas.

These sprinklers are larger devices that are used in open, un-interrupted spaces that allow water to be dispersed 25 to 30 feet or more. These heads typically pop-up during use andretract after operation for use in lawns or other areas with foot traffic. They are also available in fixed (non-pop-up) versions for use on risers in large planting areas. There are two basic types of rotary sprinklers, categorized by the mechanism that causes the sprinkler to rotate. These types are impact rotors and gear-driven rotors.

Impact rotors are the oldest type of rotary heads. Originally developed for use in wateringagricultural crops in the 1930’s, impact rotors have been used since the 1940’s for turf irrigation.

The basic operation of an impact sprinkler is simple. As water leaves the sprinkler nozzle it comes in contact with a spring-loaded drive arm. This arm is shoved aside by the force of the water. The spring then returns the arm to its original position and it again comes into contact with the water and also a stop or shoulder on the sprinkler body. The impact against the shoulder causes the entire head assembly (and sprinkler stream) to rotate slightly. This constant impact and movement will cause the head to rotate a complete circle and slowly water the entire area within that circle.

In addition, each time the water makes contact with the sprinkler arm, a small amount of "splash" is created that falls near the sprinkler head.

For part-circle sprinklers, an attachment is added to this assembly to reverse the rotation and cause the head to move backwards before it completes a full circle of revolution. This back and forth rotation allows the head to be used in areas like corners and along walks or streets.

Many industry representatives argue that the impact rotor provides the most uniform coverage of any sprinkler on the market, including spray sprinklers.

However, the impact sprinkler’s popularity has waned due to some significant operating drawbacks. The largest problem with impact sprinklers is their high maintenance requirement. As an impact sprinkler is activated, it rises out of its assembly to approximately 4 inches above the turf. During the time the sprinkler is in operation, this open cavity in the sprinkler case becomes an open catch all for trash, mud, clippings, insects, and all types of yard debris.

This debris is washed into the mechanism during the normal

operation of the head. Periodic maintenance is required to keep sprinkler canisters clean and to keep dirt and debris from causing damage to the mechanism.

The design of an impact sprinkler also has many exposed, moving parts. The springs that control the motion of the arm and the reversing mechanism can bend, rust, fall off or get entangled with debris.

Gear-driven rotary sprinklers are used in most modern systems. With these sprinklers, water turns a small turbine (water wheel or fan) in the base of the unit which drives a series of gears that cause the head to rotate. The gear drive mechanism is sealed from dirt and debris and operates without the irritating clatter of impact sprinklers. The gear driven design has dominated rotary sprinkler sales in the irrigation industry for some time, in both residential and commercial sites.

Gear driven rotors represent the biggest improvement in irrigation technology since the invention of PVC pipe. They are easy to adjust and are factory sealed to keep contaminants out. However, as with any type of equipment, the gear driven rotor can be mis-used and mis-applied.

Although the individual gear drive rotor unit is several times more costly than a spray head, its wider spacing capabilities means fewer heads are needed to cover a given area.

Some installers will use these heads in spaces that are too small for efficient rotor operation. These installers attempt to reduce the number of heads and piping connections, thus reducing trenching and labor costs. When a rotary sprinkler is forced to cover an area too small for its intended design, the result is increased misting and inefficient coverage (See Misting below). If a rotor is adjusted to reduce its throw more than 25% of its factory specification, it is being misused.

The nozzle is the device that water passes through as it is leaving the head and is to be dispersed onto the landscape. Irrigators rely on different nozzles to vary the quantity of

water dispersed during the watering cycle, as well as the distance that water is to be thrown by each head. The amount of water distributed over a given area per minute can be doubled or tripled by choosing the correct nozzle.

Spray nozzles come in varying sizes and patterns, depending upon the manufacturer. If selected and installed properly, they form a spray pattern that will provide a uniform application of water over a given area. Years of research is behind every new nozzle before it is released into the marketplace.

Rotary nozzles usually are inserted into the body of the head after it has been installed. Available nozzle sizes vary with each manufacturer. Uniform and complete coverage depends on selection of an appropriate nozzle for the area to be covered. Two different nozzles will cause the same rotary head to vary the distance of throw by 10 feet or more and increase water use by factors of two or three.

Misting is caused by high pressure at the sprinkler nozzle that results in the breakup of the spray into a very fine atomized mist. It often appears as a fog over a system as it sprays. The presence of misting is an indication that adjustments may be necessary to increase water droplet size as the spray leaves the head. Discuss this problem with your irrigation contractor to improve the overall efficiency of a system that is experiencing spray drift or misting.

Clogged nozzles cause improper application of water and reduced efficiency by

misdirecting the spray pattern. "Spitting", partial spray patterns, or a complete lack of water being discharged by a sprinkler head can be caused by debris caught inside the assembly. Removal of this debris must be done carefully since most heads are made of plastic. Digging or gouging at the orifice or opening can cause permanent damage and permanent changes to the spray pattern. 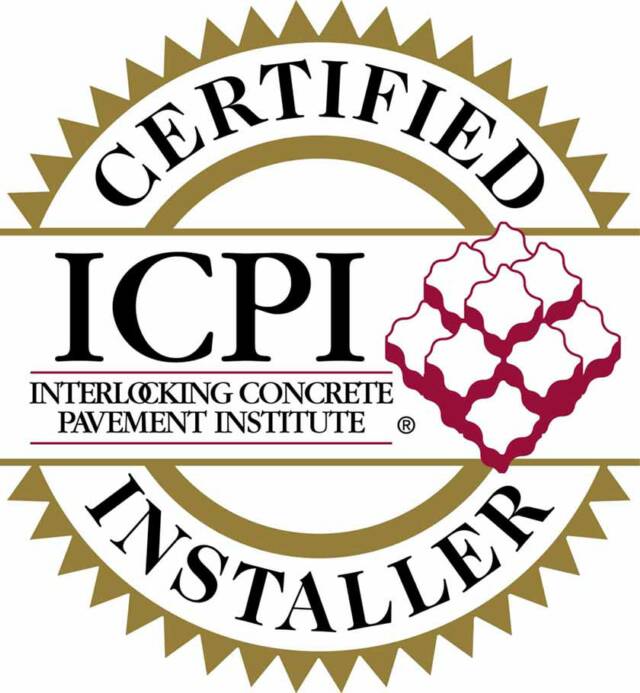